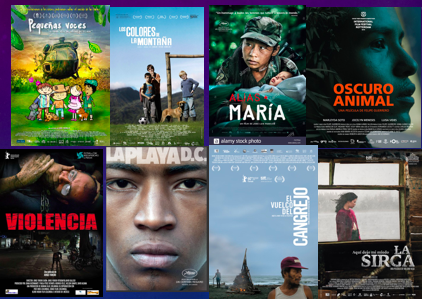 Dissertation title: The Remnants of the Armed Conflict: The Body In/After Violence in Contemporary Colombian Cinema

Contemporary Colombian cinema has been addressing 52 years of war between Colombia’s leftist guerrillas, right-wing paramilitary forces, and the Colombian military. My dissertation studies films that show a recurrent pattern or inclination for revealing the damage inflicted by the armed groups through documentary and fictional narratives produced since 2000. These films depict the fragmentation of bodies, the destruction of families, and the millions of people displaced by the war as well as the assaults and abuses endured by some of the most vulnerable groups, such as Afro-Colombians, indigenous people, women, children, and the LGBT community because of their race, age, gender, sexual orientation, and/or disability. In my project, I study the cinematic techniques employed to depict the legacies of violence—mutilation, torture, pain, trauma, and displacement–with theorists that explore viewers’ haptic experience (living in/through/as a body) and the silences and absences of traumatic experience, race, and physical disability. Chapter 1 analyzes the origins of violence in rural areas and the traumatic events that lead to the displacement of four children (three victims and one victim and victimizer) through the animated documentary Pequeñas voces directed by Jairo Carrillo. In chapter 2, I question femininity by comparing and contrasting the films Alías María (2015) directed by José Luis Rugeles and Oscuro animal (2016) directed by Felipe Guerrero with theories of melodrama and traditional forms of narrative cinema. Finally, the violent displacement and urban alienation of Afro- Colombians to Bogotá is the main focus of chapter 3. The music, traditions, and struggles of Afro- Colombians as represented in La playa D.C. (2012) directed by Juan Andrés Arango allow me to analyze the future of a demographic often ignored by the State and rejected by Colombian society. My engagement with these films reveals crucial reflections on the urgent humanitarian problems facing the nation, particularly the reintegration and rehabilitation of the victims of the conflict. I argue that contemporary Colombian cinema is a vital part of the project to question, challenge, and critique gender violence, traditional gender norms, the long-lasting effects of trauma, and the State’s actions with regards to displacement.

“Entrevista al director Colombiano Jorge Forero.” Yzur, the Literary Magazine of the Department of Spanish and Portuguese, no. 1-1, March 2018, pp 52-57.

YZUR, The Literary Magazine of the Department of Spanish and Portuguese at Rutgers University